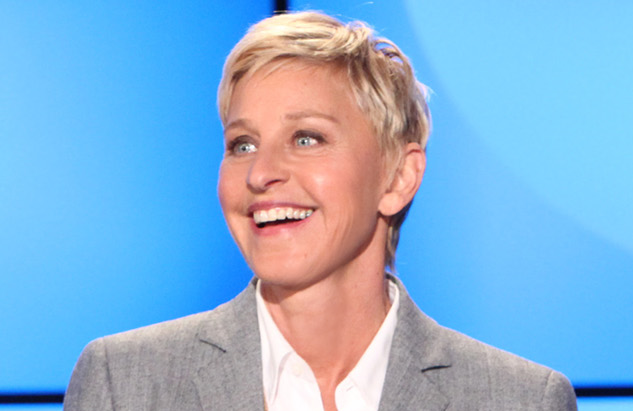 Ellen DeGeneres on the set of her eponymous daytime talk show. (Photo: Telepictures)


Overwhelmed by Peak TV? Aaron Barnhart is your guide to the good, the great, and the skippable.
Subscribe
to get all his Primetimer reviews.

For as long as I’ve been a fan of late-night talk shows — basically all my life — there’s always been a lurking question: Why aren’t more women hosting these shows? Despite some recent high-profile moves — Lilly Singh taking over the old NBC Later franchise and TBS giving Samantha Bee her own show — the question rightly still gets asked.

The fallback answer was always demographics. Advertisers wanted to reach young men in late night, so men got to host those shows. Women traditionally watch daytime TV, so those hosting gigs went to women. That marketing-talk masked other more dubious assumptions. Did all late-night viewers really prefer female guests falling out of skimpy dresses? Did every daytime talk show have to feature shocking confessions and dieting tips?

In 1996 NBC effectively challenged that logic when it gave Broadway star and Hollywood second banana Rosie O’Donnell a late-night talk show and scheduled it at 10 o’clock in the morning. Rosie had a band, sat behind a desk, and did her show like it was airing 12 hours later. And this may be hard to believe, but the 1996 model Rosie was really fun to be around: light, breezy, up for anything. Audience members introduced her instead of an announcer. She gave away lots of stuff. The media crowned her the Queen of Nice (a title she never accepted, to her credit). Some of us thought she was better at interviewing than half the guys in late night.

Eventually, the Rosie O’Donnell Show went to hell for reasons we needn’t rehash here. The point is, Rosie had shown the networks that a woman could host a late-night show at any hour. As more people began time-shifting and watching TV online, the whole time slot thing became almost meaningless.

When her show went away in 2002, it cleared the stage for a new entrant — the standup comic Ellen DeGeneres, who at that moment stood at a professional crossroads. Five years earlier DeGeneres had endured the biggest, longest, most uncomfortable coming-out announcement in history, and emerged with her dignity and career intact. Hosting the Emmys after the 9/11 attacks, she brought down the house by asking, “What would bug the Taliban more than seeing a gay woman in a suit surrounded by Jews?”

She had just attempted a comeback on a new sitcom, which only proved that scripted TV was too small a box for her. Like all standup comedians, DeGeneres was a walking focus group, someone who knew what her audience liked because they were constantly giving her feedback. She belonged on live-to-tape television. But since Leno, Letterman, and Conan weren’t going anywhere, and CBS had decided the future of late night was a Scotsman, daytime was the only path open to her.

The Ellen DeGeneres Show launched in the fall of 2003 to great reviews. It has only gotten better over time. Comparisons to Oprah now come her way as DeGeneres piles up the seasons (she’s signed through year 19, in 2022) and collects ever more high-powered friends (the Obamas and Bushes). But as I watch her show, the name that comes to mind is Don Francisco. Never heard of him? For over 50 years he was a towering presence in Spanish-language TV as host of his weekly variety show Sábado Gigante. That was a crazy, shape-shifting extravaganza. One moment Don would be interviewing a heartbroken couple about… something (it was in Spanish), and the next thing you knew he’d be giving away vacations or playing some zany game with audience members.

In one important respect, though, DeGeneres isn’t like either Oprah or the Latin Ed Sullivan. At her core she’s a standup comedian, and a hard-working one, performing gigs, taping a 2018 Netflix special, and writing three comedy bestsellers (two more than Leno and Letterman if you don’t count Dave’s books of top ten lists). “Hand lotion is tricky,” she wrote in her 2012 book Seriously … I’m Kidding. “Portia once put too much on and got stuck in the bathroom for an hour trying to turn the doorknob. Then I had to remind her we have a door that slides.”

What no one could have foreseen back in 2003 is that her ultra-chill, semi-self-deprecating comic persona would be so well suited to the Peak TV era. An unthreatening woman just uh, you know, talking, making it up as she goes, is a soothing presence in an age when everything keeps getting faster and more frenetic. The zaniness on Ellen (as everyone calls it now) is farmed out to a cast of regulars, like the dancing deejay sidekick tWitch and Ellen’s “wacky” friend Kym Douglas. For the past two weeks it’s been pure bedlam as DeGeneres casually hands out thousands of dollars in gift cards and vacations as part of her annual “Ellen’s 12 Days of Giveaways” spectacular.

Not since Johnny Carson have I seen a talk-show host so in command of her environment as DeGeneres is on her show. Last month she had on the actress Dakota Johnson, who — perhaps prompted by a show producer — stirred up a mild argument over whether Johnson had invited Ellen to her recent birthday party. Ellen said she hadn’t, Johnson said she had and, what’s more, she remembers specifically inviting Ellen because “the last time I was on the show, last year, you gave me a bunch of s— about not inviting you.”

Ellen calmly turned to an off-camera producer, who confirmed. “You were out of town,” the producer said.

“Oh yeah,” Ellen said, chuckling. “I had that thing.” As Twitter soon figured out, “that thing” that kept her from Dakota Johnson’s party was a Cowboys game. At the invitation of the Jerry Jones family, DeGeneres flew to Dallas with her wife, Portia de Rossi, and watched a game in the owner’s suite, where they enjoyed the company of George W. Bush — to the inflamed outrage of half the Internet. It was a moment that could have, and has, brought down lesser late-night hosts. But on the show she turned it into a teachable moment about civility and politics that resounded and upstaged the initial tempest.

But now here Dakota Johnson was, stirring it all up again, and adding a diabolical twist: snubbing a beloved actress on her birthday (which, depending on who you’re following on Twitter, is worse than sitting by a Bush).

Going on instinct, Ellen gently moved the conversation along with her flustered guest. Noting that Tig Notaro — a close friend — had performed standup at the birthday party, Ellen said, “She’s hilarious.”

“She’s my favorite comedian,” Dakota Johnson said, agreeably, before realizing what she was saying. The crowd ooooohed and the host made a pouty face.

Then, as casually as you like, Ellen replied, “That’s funny, I was just telling my favorite actor Jennifer Aniston …” and the tension broke in a sea of laughs and applause. Ellen’s social media staff rapidly posted the exchange online with the headline of their choosing: “Dakota Johnson’s Favorite Comedian Isn’t Ellen.” The media took it from there. Dakota Johnson references popped up casually on later episodes, and — for the win — Tig Notaro showed up last week to help Ellen give away prizes to audience members.

DeGeneres will be occupying three hours of NBC prime time this week with her special Ellen’s Greatest Night of Giveaways, which is actually a three-night affair. It’s less an amped-up version of her already high-energy “12 Days of Giveaways” than a chance for Ellen’s celebrity friends to hand out primetime-sized gifts to “deserving recipients.” In one publicity photo, Aquaman’s Jason Momoa is seen making the day of Bryan Kimball, a California man who made an inspiring recovery from a diving accident that left him initially paralyzed from the neck down. In another photo, Jennifer Aniston makes Lexi and Elyse Kimball, student-athletes from Connecticut, and their dad Mark cry — and, let’s be honest, probably everyone who watches as well.

Aaron Barnhart has written about television since 1994, including 15 years as TV critic for the Kansas City Star.

Why YouTube is the true successor to TV – The Week