The plan remains the same for Oleksandr Usyk—return to the ring this spring and then, with a win, compete for the heavyweight crown.

All that has changed is the timeline.

The 2012 Olympic Gold medalist and former undisputed cruiserweight champion from Ukraine remains on course to next face England’s Derek Chisora. The bout will likely land in London, although with the time frame pushed back from its originally targeted March 28 date.

“We expect him fighting in May versus Chisora,” Alex Krassyuk, general director of K2 Promotions-Ukraine confirmed to BoxingScene.com. 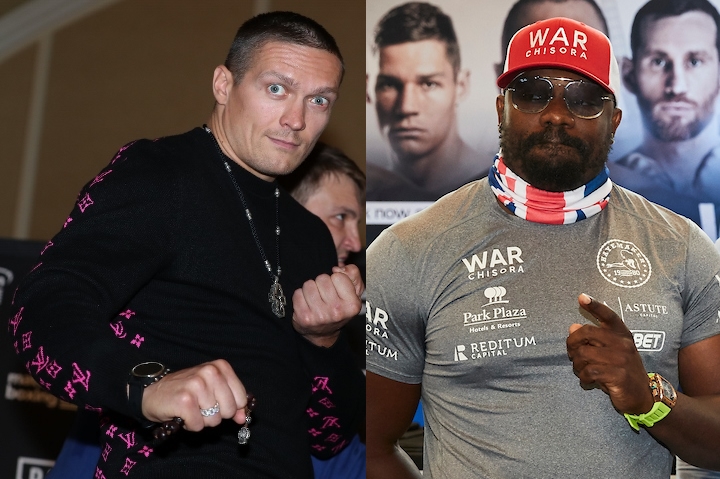 The aforementioned clash is part of a trio of heavyweight headliners in the United Kingdom planned by Matchroom Boxing’s Eddie Hearn, Usyk’s co-promoter. Earlier plans called for the bout with Chisora (32-9, 23KOs) to land at the start of the series, which was to be followed interim heavyweight titlist Dillian Whyte (27-1, 18KOs) versus Russia’s Alexander Povetkin (35-2-1, 24KOs) and anchored by unified heavyweight titlist Anthony Joshua (23-1, 21KOs) in a mandatory defense versus Bulgaria’s Kubrat Pulev (28-1, 14KOs).

Usyk (17-0, 13KOs)—upon medical advice—made the command decision to stall his 2020 debut by 6-8 weeks, thus causing the reshuffled lineup. The 33-year old southpaw continues to rehabilitate past wounds, including: an injury to his left elbow which delayed his World Boxing Super Series cruiserweight final and undisputed championship showdown versus Murat Gassiev in 2018; and a torn right biceps injury suffered a year ago, thus delaying his foray into the heavyweight division.

The latter injury put Usyk out of the ring for 11 months before returning last October, when he scored a 7th round stoppage of Chazz Witherspoon to preserve his place as mandatory contender to one of Joshua’s title. An agreement was reached between the sanctioning bodies where Pulev would get first dibs at England’s Joshua. Usyk is guaranteed to face the winner, having accepted a fight with Chisora as means to remain active.

However, it was maintenance to his elbow which has caused the current delay.

“Usyk is not injured,” Krassyuk emphasized. “He is 33 and as the professional sportsman has some issues about his body. Normally he does his recovery routine once a year. This year, his doctor emphasized some rehab measures on his elbow and [the full recovery] took a bit [longer] than usual.

Jake Donovan is a senior writer for BoxingScene.com. Twitter: @JakeNDaBox