When Gervonta Davis defeated Yuriorkis Gamboa last December at State Farm Arena in Atlanta, Georgia, no one was happier than Terri Moss.

“One of the things we say here in Atlanta all the time is, ‘It’s just not a boxing town,’ but at this point I’m starting to beg to differ when we just saw Gervonta Davis pack the arena,” said Moss. “I’ve seen that arena half-full on other boxing events, so it’s really starting to get a little better, which is making us really excited.”

The excitement in Moss’ voice is evident, especially when she talks about another one of her many passions on the local fight scene – coaching the Georgia Tech Boxing Club in preparation for the United States Intercollegiate Boxing Association (USIBA) National Championships next month.

Yes, in a world of helicopter parents, snow plow parents, and everyone being offended about everything while avoiding anything requiring grit and determination, some of the country’s brightest young minds are putting the gloves on and duking it out in the ring for nothing more than the sake of sport.

Isn’t that worth getting excited about? Because in this day and age, anything that forces young people to answer questions about themselves and reach for something deeper than the nearest latte or social media app is glorious.

“I think they want to be challenged,” said Moss of the collegiate boxers she works with. “This proves it. These are kids that their parents have probably spent their whole life making sure they were on point with the grades, and a lot of them are really smart. So not a lot of them are athletes; there are some, but not a whole lot. And I can see in some of the students that they’ve been a little cushioned, or a lot cushioned, honestly. (Laughs) But they really want to get out there and try something. They want to prove to themselves that they can do it.”

And while picking up the nuts and bolts of the sport and sparring a bit is nice, it’s in a real competition that these boxers learn the most about the sport and themselves. So from March 19-21, schools from around the country will be sending their boxers to Atlanta, even if boxing is still just considered a club sport.

“It took us six months to get approved,” said Moss of the GA Tech Boxing Club. “Most of the schools won’t even let them train on campus.”

That’s understandable, considering that boxing has to be a lot more dangerous than football or all-night drinking parties in campus frat houses. But I digress.

So while boxing is still considered a niche sport, over 50 colleges were represented in last year’s USIBA tournament, ranging from the University of Illinois (Men’s champs) and University of Michigan (Women’s champs) to Georgetown, Florida, Miami, FSU and Kansas.

“It’s really cool to see the teams there, with their team spirit, wearing their school logos and getting in there and having a boxing team,” Moss said. “It’s like being at a football game, but with boxing, and the team spirit’s really cool. It’s a really cool experience and I think it creates new fans, which is something that boxing badly needs at this point. I never felt like boxing was dying or dead – Boxing is forever. But the one thing that’s good is you get new fans, especially young kids that are in college.” 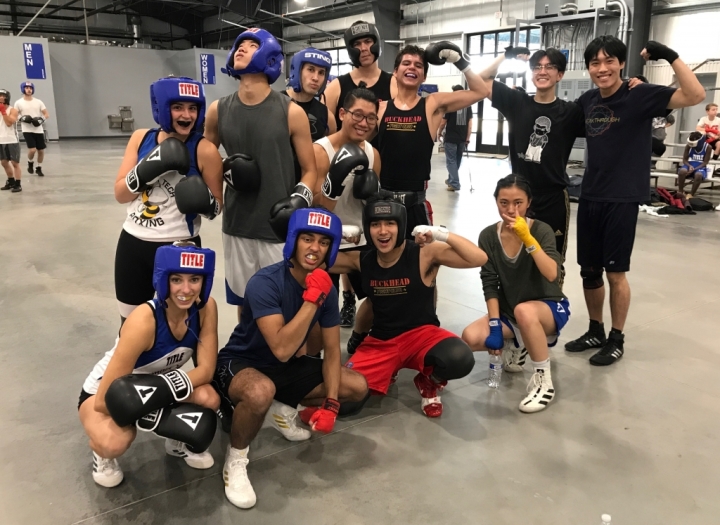 As far as rules go, the USIBA is affiliated with USA Boxing, and the tournament is open to any boxer with a USA Boxing passbook who is a full-time college student, even if his or her school doesn’t have a boxing program.

“But most of what you see are real teams from various colleges and universities,” said Moss. “They will let independents box, but there’s not many of them up there.”

And if you’re concerned that the nuclear physics major from your local college is going to get matched up with some killer with 300 amateur fights, the USIBA has implemented rules to make sure that doesn’t happen.

“There are a lot of beginners,” she said. “So one of the things they did is they made a beginner division for boxers with zero to two fights. Three to nine fights is novice and open is 10 fights and over. And once you’ve been in the tournament once, you have to go to novice the next time.”

As far as Moss is concerned, about the only bad thing is that the tournament is being held during Spring Break, a valid gripe from the person who is in charge of hosting the event this year.

“The number one thing that’s important to everybody involved is the student’s grades and the safety of the student, so they really go out of the way to make sure that they only do the National Championships during Spring Break, which really hurts ticket sales,” laughs Moss. “It makes it tough for anybody putting on this tournament because we could pack the house every single day if it was during school. But we’re gonna make it work.”

Moss always has, whether as a coach, a promoter, or a former prizefighter whose five-year pro career (which began when she was 36 with no amateur background) saw her win the WIBF world minimumweight title and earn induction to the International Women’s Boxing Hall of Fame in 2015. Yet for all she’s accomplished, she may be most satisfied by the work she’s doing with a group of pugilists that aren’t likely to ever follow in her footsteps. Then again, maybe they will.

“They’re a bunch of engineers,” she said of her Georgia Tech Boxing Club squad. “But they’re so excited. When you take a lot of really smart guys and put a pair of boxing gloves on ‘em, they just head in first. They don’t even care how it is. They’re just so excited to be there. And most of them have done no sports ever. It kinda sounds like me, honestly. (Laughs)”