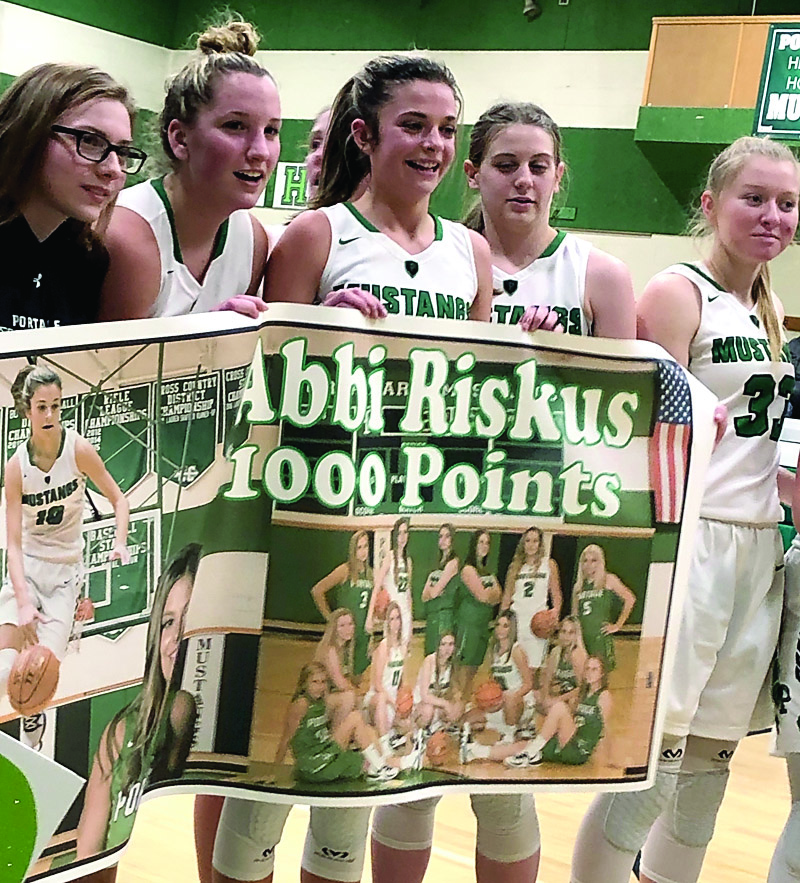 Fortunately, for the Lady Mustangs, Shade couldn’t buy a bucket either as neither team saw a shot go through for nearly three minutes.

The shots eventually started to fall for Portage as the North division’s top seed used its full-court press to frustrate the Lady Panthers, the second seed from the South.

The Lady Mustangs seized control of the contest and never looked back, as they never trailed in punching their ticket to the title game with a 69-38 pounding of Shade on Wednesday night at Len Chappell Gymnasium.

“Obviously, every year that’s a goal — to get there (championship game), Portage coach Lance Hudak. “This group took it to heart starting in early May that they were getting there this year. Really, they left no doubt this year in conference that they really want this.”

In addition to celebrating advancing to Friday’s championship game at the University of Pittsburgh at Johnstown’s Sports Center, Portage and Abbi Riskus celebrated a milestone. The senior went over the 1,000-career point mark in the third quarter.

Maddy Hudak wasted little time answering the call once she was inserted into the game. The freshman hit a floater at 5:21 of the first to put Portage on the board.

The Lady Mustangs got out to an 8-0 lead before Jenna Muha, who led the Lady Panthers with 18 points and a game-high 18 rebounds, made a layup at the 2:30 mark.

Portage led 15-6 after one quarter of play, and it stretched the lead to 17 (33-16) at the half as the press continued to give Shade, who turned it over 20 times in the opening half, fits.

“We shot ourselves in the foot,” Shade coach Andy Muha said. “They’re (Portage) a great team — they play up-and-down the floor. They make you make those mistakes — that’s part of the game … They haven’t lost to anybody in the WestPAC, and there’s a reason for it.”

Riskus, who needed 23 points entering the contest, never seemed in a rush to get to the mark. She allowed her shots to come within the flow of the offense.

Scoring just eight through two quarters of play, Riskus came out firing as she knocked down three 3-pointers and a foul shot to put herself just three points shy of the milestone.

The moment came at the 2:38 mark of the third when she buried a trey — to put Portage up 54-21 — about three feet behind the line and right in front of her bench, which went wild and mobbed her immediately as the game was stopped.

“It felt good,” Riskus said of the shot. “I could hear Lance scream in the back, ‘That’s the one.’”

Riskus joins 10 other Lady Mustangs in the 1,000-point club, including teammate Kara Dividock who eclipsed the mark earlier this season.

“She’s a basketball player,” Hudak said. “She plays all-year long with travel, lessons and just works so hard. I’m very happy for her to get her 1,000th. It was a big sigh of relief for her.”

In the third stanza, Portage outscored Shade by a 24-9 margin to stretch its lead to 57-25. Riskus had 15 of her game-high 23 points in the quarter.

The Lady Panthers won the battle of the boards by a 53-43 margin. Morgan Zimmerman also reached double figures with 13 rebounds. However, it was the 30 forced turnovers by the Lady Mustangs on the defensive end of the floor that won out in the end.

“That’s our game (press),” Hudak said. “… We really utilize our speed baseline-to-baseline. Our press is our best offense a lot. You saw it in the first half with all of those turnovers — even though we weren’t making shots maybe from the outside and all … We came out in the second half and shots started to fall as I knew they would. We’ve got a number of good shooters on this team, and it’s a law of averages that they’re going to start going — especially when you’re not contested from that far out.”

On the flip side, Portage took care of the ball as it coughed it up just six times throughout.

Maddy Hudak was the only other Lady Mustang to reach double figures. She finished with 10, while Emma Kissell pulled down 11 rebounds.

Portage, in the WestPAC title game for the first time since 2017, will battle Shanksville-Stonycreek, a 39-26 winner over Windber, at 6:30 p.m.

“This win is very important,” Riskus said. “I’ve been wanting to win a WestPAC championship since freshman year. So, the win was definitely the most important thing. I knew it (scoring mark) would come eventually, so I just kind of let things go how they usually go.”

From Mirror reports UNIVERSITY PARK — In a battle of two of the top three teams in the country, the Penn State …

WILLIAMSBURG — When all things are considered, it’s usually better to finish an athletic contest strong than to …

BELLEFONTE — Nick Gearhart went over the 1,000-point mark for his career with Huntingdon in a 70-41 win at …