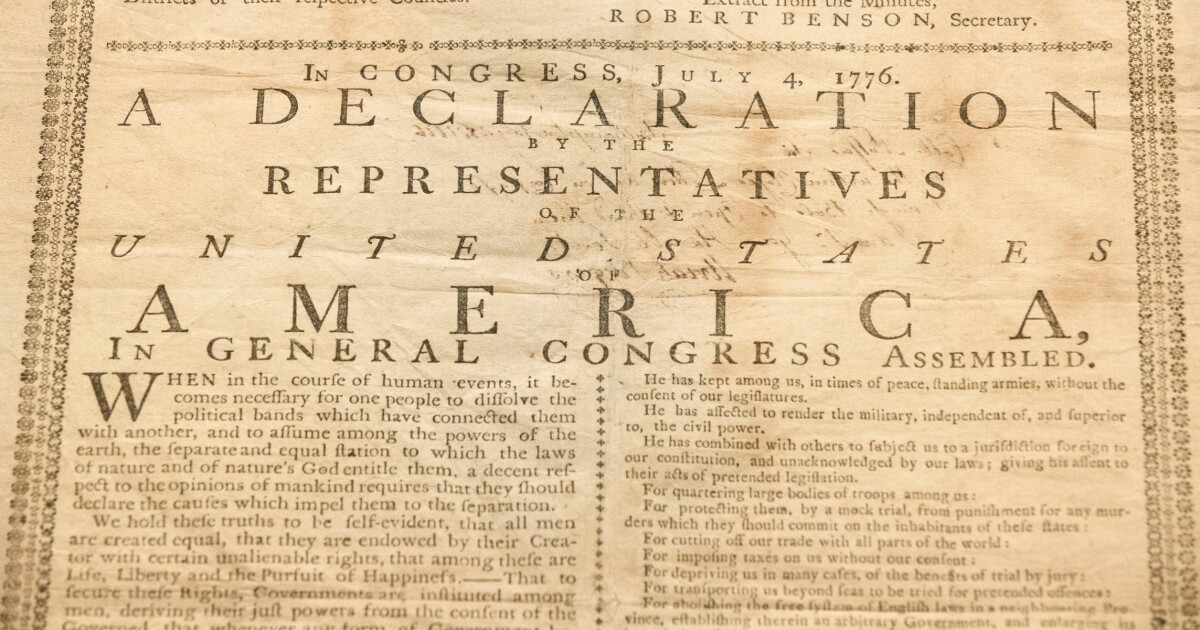 “1776” is an assembly of independent voices who uphold our country’s authentic founding virtues and values and challenge those who assert America is forever defined by its past failures, such as slavery.

While the country’s chatting classes have had their attention riveted on the impeachment of the president and the national elections to take place this year, the moral ground under our feet has been shaking. Its small seismic tremors portend a coming major eruption that could tear this country apart.
As those who promote identity politics fan the flames of animosity and thrive on division, our nation is breaking apart.

One of the most virulent and volatile areas of division is race. The purveyors of animosity have fine-tuned their strategy on this issue, creating a villain composed of “white privilege” and “institutional racism” that must be countered through a game plan of entitlements and reparations for its victims.

The grand weapon in this warfare is the 1619 Project, launched by the New York Times in a 100-page insert of a collection of writings. These writings postulate that the “actual” founding of America occurred in 1619, with the arrival of the first slaves on our nation’s shores. They declare that America is essentially and irrevocably rooted in injustice and racism.

The weight of the legacy of slavery and Jim Crow laws is said to be the cause of any and all racial disparity that exists today and is declared as the source of the devastation of crime-ridden, predominantly black inner cities and skyrocketing homicides, as well as the dissolution of families and communities.

To counter the debilitating and dangerous message of the 1619 Project, we are launching “1776,” honoring the vision of our nation’s Founders who saw beyond their years. Though slavery and discrimination are undeniably a tragic part of our nation’s history, we have made great strides along its long and tortuous journey to realize its promise and abide by its founding principles. People are motivated to achieve and to overcome the challenges that confront them when they learn about inspiring victories that are possible, rather than being barraged by constant reminders of injuries they have suffered.

In truth, even during the times of the worst oppression, there were blacks who were in slavery but not of slavery, who maintained a strong moral code and a belief in self-determination and mutual support that allowed them to rise. A surprising number of black men and women who were born slaves died as millionaires. Even in the era of legislated segregation and discrimination, blacks tapped an entrepreneurial legacy to launch thriving enterprises, including hotels, banks, hospitals, dental schools, insurance companies, and a railroad. In fact, the black business district of Durham, North Carolina, was widely known as “Black Wall Street.”

Another famous black entrepreneurial enclave was the Greenwood section of Tulsa, Oklahoma. When oil was discovered in Tulsa in the early 1900s, the city underwent an enormous growth spurt. Though African Americans were not allowed to create business ventures in the major district and were not even welcomed as customers in the white business district, rather than taking service jobs and doing domestic service labor for others, many adventurous blacks chose to develop their own business district. By 1921, the business enclave had developed into an impressive array of enterprises.

Tragically, in that year, a young black delivery man was falsely accused of attacking a white woman. Tensions rose and erupted into chaos as a mob of angry whites looted stores, shot at blacks in the streets, and torched businesses, homes, and churches. In this violence, 860 African American businesses and homes were destroyed, and, afterward, the Greenwood business section lay in ruins. Undaunted and displaying the same entrepreneurial spirit that initially built the Greenwood section, blacks joined together in a massive effort of rebuilding. By 1938, business enterprises and community organizations, once again, anchored the community.

This spectrum of achievement is a powerful refutation of the claim that the destiny of black Americans is determined by what whites do, or what they have done in the past.

Until the 1960s, poverty did not entail social dysfunction in the black community. In 10 years of the Depression, when the United States overall had a negative gross national product and the unemployment rate in the black community was over 40%, the marriage rate among blacks was higher than it was among whites — this despite times of economic deprivation and racism.

In 1925, in New York City, 85% of black families comprised of a husband and wife raising their children. Today, the rate of out-of-wedlock births among blacks has skyrocketed to nearly 71%.

In his book, The Future Once Happened Here, historian Fred Siegel explains that radical, liberal social activists in the 1960s concluded that one way to reveal the moral shortcomings of capitalism was to flood the system with welfare recipients. This would involve detaching work from income, thereby diminishing men and the role they played as fathers; increasing welfare dependency, drug addiction, and school dropouts; and thus, ultimately, “opening [the nation up] to radical change.” These policies, espoused by Columbia University professors Richard Cloward, Frances Fox Piven, and others, were followed by government action to recruit people into the welfare system.

Prior to this time — even in the face of Jim Crow laws, legalized discrimination, and a lack of voting rights — the black community did not experience the wide-scale despair and destruction that we witness today. This is because, even in the face of great adversity, those earlier black communities had a Christian moral code of conduct, a conviction of self-determination and mutual assistance, and strong families and communities to fall back on.

We are launching “1776” to counter the false history that the 1619 Project espouses and has disseminated as a school curriculum. We aim to highlight the victories that are possible in spite of oppression and to open the door to discussion of solutions to the moral disarray that afflicts not only minority, low-income neighborhoods but that also takes its toll among the sons and daughters of the affluent. In Palo Alto, California, where two-parent, highly-educated households predominate, the suicide rate among teenagers is six times the national average. Drug addiction among affluent, white youths in New Hampshire is dramatically rising.

Throughout America, we are witnessing widespread self-destruction and devastation, a consequence of the perversion of the values that once united us and protected us from both internal and external enemies. As Samuel Adams presciently warned, “A dissolution of principles and manners will more surely overthrow the liberties of America than the whole force of the common enemy … Neither the wisest constitution nor the wisest laws will secure the liberty and happiness of a people whose manners are universally corrupt.”

As long as the perpetrators of race grievance that are represented by the 1619 Project are permitted to go unchallenged, this country will continue its social, spiritual, and moral decline.

“1776” has enlisted a group of black scholars and social activists who uphold the true origins of our nation and the principles through which its founding promise can be fulfilled. While acknowledging that slavery and discrimination are part of our nation’s history, we believe that America should not be defined solely by this “birth defect” and that black Americans should not be portrayed as perpetually helpless victims.

Rather than giving point-by-point counterarguments to the findings and conclusion of the 1619 Project, our focus will be to identify and highlight solutions, models of success in reviving our streets and communities, and actionable goals that should be pursued.

We will tell the untold stories of people who have succeeded in the face of daunting obstacles, including slaves who became millionaires through entrepreneurial determination; former slaves who bought the plantations on which they once worked; present-day, inner-city grassroots leaders who are transforming drug-infested communities to peaceful, safe places to raise families; and others.

The stories of the successes of black Americans later will be complemented by examples of achievement against the odds by men, women, and youths representing a spectrum of races and ethnicities.

What America is confronting today, with the dominance of race grievance and identity politics, has had, since its inception, an even more sinister purpose: to maintain the political power of the landlord merchant class, according to historian James Oakes in his new book, The Scorpion’s Sting.

Oakes quotes Adolph L. Reed Jr., a political science professor at the University of Pennsylvania: “Identity is very much the ideology of the professional management class. They prefer to talk about identity over capitalism and the inequities of capitalism. We have an atrocious wealth gap in this country. It’s not a black and white wealth gap. It’s a wealth gap. But if you keep rephrasing it as black/white and shift it to a racial argument, you undermine the possibility of building a working-class coalition, which, by definition, would be disproportionately black, female, Latino, and still majority white. That is the kind of identity politics that gets erased.”

Throughout her checkered past, America has been and remains a beacon of hope to people around the world. Join us in exploring stories of truth, perseverance, and triumph that acknowledge America’s failures but celebrate her enduring promise.

Robert L. Woodson, Sr., a former civil rights activist and author of The Triumphs of Joseph: How community healers are reviving our streets and neighborhoods, is the founder and CEO of the Woodson Center.

Where are the progressive religious voices on Trump? – Abilene Reporter-News

VOICES: ‘In this crisis, we’re going to figure out who we are’ – Facing South