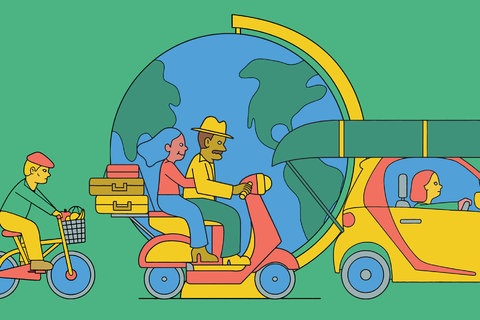 According to a list compiled by a dozen sustainability organizations, cities and towns in Slovenia, including Ljubljana, as well as locations in Spain and Palau — where visitors must pledge to protect the natural and cultural heritage before entering — were among the best places to visit and leave a light footprint in 2019.

Each of them was selected based on certain criteria: that they had a governing body to manage sustainability; showed commitment to protecting natural resources, people and heritage; and reduced energy consumption, among other factors. The aim of the list is to raise the bar on sustainability issues for all cities, said Claire Ellis, the chair of Ecotourism Australia, one of the organizations that helped determine the list.

Slovenia, Dr. Ellis added, was among the first countries to develop sustainability tools and certification programs at the national level. In 2016 its capital, Ljubljana, was voted Europe’s greenest city by the European Union, thanks to its public transport, pedestrian and cycling infrastructure, and commitment to protecting green areas and saving waste water.

Increasingly, Ljubljana and other sustainable cities are becoming aware of the “over tourism” occuring in cities such as Barcelona and Venice, Dr. Ellis and other experts said. In Venice, for example, locals have become increasingly concerned about the cruise ships that cause environmental damage, dominate the skyline and often cause overcrowding of the city. Similar issues plague Barcelona, which is experiencing soaring numbers of visitors.