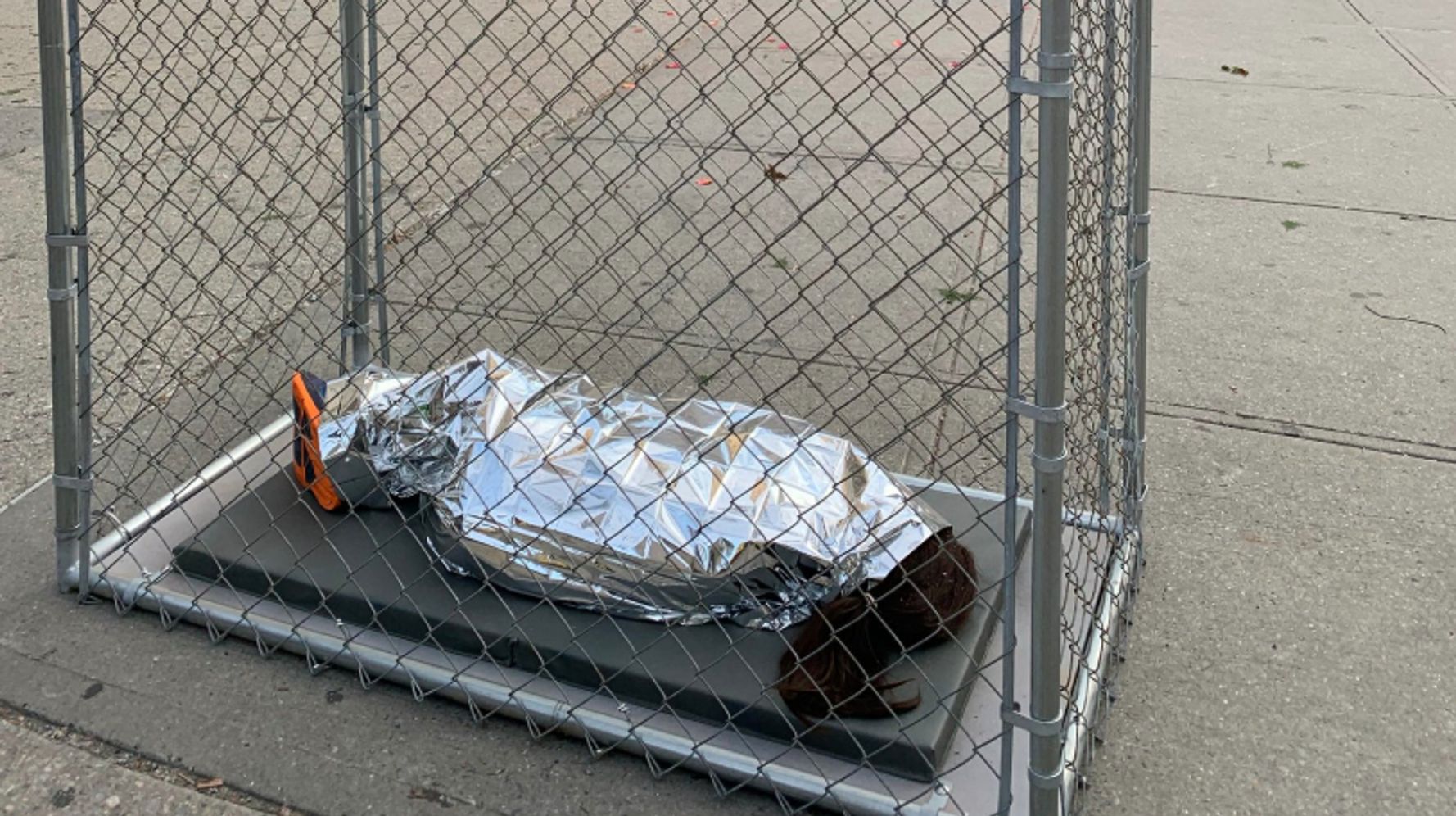 Some people in New York City were confronted with an alarming image as they walked down the street on Wednesday morning: a chain-link cage on the sidewalk containing a child-size mannequin wrapped in a foil blanket, with audio playing of migrant children crying.

More than 20 cages were placed around Manhattan and Brooklyn ― from Union Square to the Barclays Center sports arena ― as part of a campaign called #NoKidsInCages by immigration nonprofit RAICES and ad agency Badger & Winters.

It was meant to draw Americans’ attention to the children and other migrants being held in alarming conditions at the U.S.-Mexico border.

Speakers in the cages played the viral recording released by ProPublica last summer of kids wailing for their “mamá” and “papá” after having been separated from them at the border as a result of the Trump administration’s “zero tolerance” immigration policy.

“We want to bring this back to the consciousness of the American people,” RAICES CEO Jonathan Ryan told HuffPost. “One of the many unfortunate consequences of the repeated traumatic stories coming from the border is that, as horrified and angry as people have been, we also become desensitized. It’s important for people … to be confronted with the reality that this is about children, human beings, whose lives are forever affected.”

“This is being done in our name by people who we elected,” he added. “And if we don’t do something to stop this, this will become who we are.”

About two dozen cages were dropped around the city from about 4 a.m. to 5 a.m., Ryan said. By midafternoon most of them had been taken down by police or city employees, with three remaining around 2 p.m., per Ryan. The New York Police Department confirmed to HuffPost that more than half a dozen cages had been removed around Manhattan, but did not respond to questions as to why.

Art installation all over NYC today organized by @RAICESTEXAS and Badges & Winters. With audio of actual children weeping for their parents playing. For some it was disturbing, but fact is, it’s happening. Trump made it happen. Sharing this is an act of protest. #NoKidsInCages https://t.co/EmI697Pt4J

The online campaign associated with the installations recalls the family separations under President Donald Trump’s hard-line zero-tolerance policy, which led to the separation of thousands of children from their parents last year. The policy sparked protests nationwide and was reversed by executive order in late June. But a January report from the Department of Health and Human Services found the administration may have separated thousands more kids from their families than was previously known, and it did not know how many or whether they were reunited.

He noted undocumented immigrant families are still separated “routinely” at the border, including when migrant kids are split from other guardians like uncles and aunts or older siblings. Separations occur inside the country too, he said, when a child’s undocumented mom or dad is arrested by immigration agents, for instance in a workplace raid.

U.S. Customs and Border Protection apprehended over 109,000 people at the border in April ― more than double the number of migrants detained during that month last year. A majority of the migrants apprehended were either families traveling together or unaccompanied kids.

A Department of Homeland Security watchdog, reporting on Border Patrol facilities in El Paso, Texas, found last month that detained migrants were kept in dirty and extremely crowded conditions, forcing some people to stand on toilets to get some breathing room.

Last week, Trump said he reached an agreement with Mexico that includes “rapidly” returning to Mexico anyone who crosses the border seeking asylum in the U.S. Advocates are concerned about the dangerous conditions in cities such as Tijuana and Ciudad Juárez, where more migrants will now be forced to wait as their claims are processed.

“When the American people hear stories of this problem being fixed by the ‘remain in Mexico’ policy, it hasn’t been fixed, it’s just further from their view,” Ryan said. “The suffering will only increase.”

Where’s the same public outcry over #NoKidsInCages for the actual kids being held in cages by the Trump Administration. Where. Is. The. Outcry. for the kids who have died while in U.S. facilities under the #TrumpAdministration https://t.co/dt1rlQa1kV