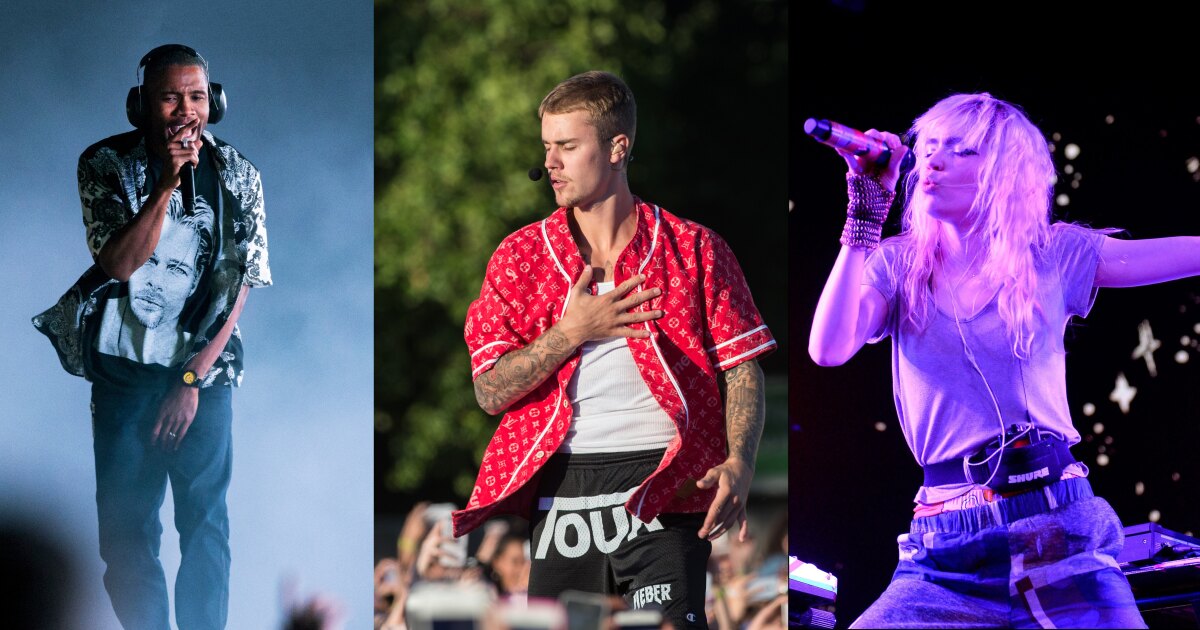 With 2019 finally behind us — along with its glut of year- (and decade-) end lists of the best in music — it’s time at last to turn our attention to the sounds in store for 2020. And what better way to do that than with … a list!? Here’s a rundown of 13 albums to look forward to over the next few months, with release dates included when known.

Selena Gomez, “Rare” (Jan. 10)
The onetime Disney Channel star has never quite gotten the credit she deserves for her adventurous record-making. Sure, her and DJ Snake’s “Taki Taki” was a shameless Latin-pop play complete with a regrettable “fiesta”/”siesta” rhyme. But before that she turned the Talking Heads’ “Psycho Killer” into the sinuous “Bad Liar,” while her last album, 2015’s “Revival,” feels now like a precursor to Billie Eilish’s whispery ASMR-core. Preceded by a No. 1 single in the grandly emotional “Lose You to Love Me,” Gomez’s new one promises more ear-grabbing textures, as well as her intimate thoughts on her breakup with the Weeknd and her recent health troubles (including a much-publicized kidney transplant).

Halsey, “Manic” (Jan. 17)
Heed that album title: Along with the country-ish “Finally / Beautiful Stranger” and the chart-topping EDM ballad “Without Me,” the latest from this style-hopping streaming native features far-flung hookups with Alanis Morissette (a clear influence), Dominic Fike and Suga of BTS (with whom she teamed for last year’s sprightly K-pop hit “Boy With Luv”).

Green Day, “Father of All…” (Feb. 7)
The pop-punk veterans will play stadiums this summer as part of a rock’s-not-dead package that also includes Fall Out Boy and Weezer. (Called the Hella Mega Tour, it’s scheduled to stop at Dodger Stadium on July 25.) Yet what’s appealing about the short and snappy songs on Green Day’s 13th studio album is that they sound like they were born in a tiny club.

Tame Impala, “The Slow Rush” (Feb. 14)
In the works since well before his headlining performance at Coachella last year, Kevin Parker’s fourth full-length as Tame Impala is his most painstakingly detailed yet, with trippy guitar lines and delicate vocal melodies over buoyant grooves that reflect his recent studio work with the likes of Mark Ronson and Kali Uchis. You’d call the result obsessive if it didn’t just make you want to dance.

Grimes, “Miss Anthropocene” (Feb. 21)
The Canadian singer and producer has spoken expansively about her oft-delayed follow-up to 2015’s “Art Angels,” most recently saying it’s “about a modern demonology or a modern pantheon where every song is about a different way to suffer,” as she put it in a published conversation with Lana Del Rey. But even Grimes knows that many listeners will be scrutinizing “Miss Anthropocene’s” knotty electronic pop for clues about her unlikely romantic relationship with Tesla’s Elon Musk.

Dua Lipa, “Future Nostalgia”
Last year’s Grammy winner for new artist has had disco and house music on her mind, to judge from “Electricity” and “One Kiss” — a pair of excellent collaborations with Silk City and Calvin Harris, respectively — and from “Don’t Start Now,” the delightfully rubbery lead single from her sophomore solo disc set for release sometime this year. The throwback sound suits Lipa’s throaty vocals, which have grown more soulful since her catchy but faceless 2017 debut.

Ozzy Osbourne, “Ordinary Man”
The 71-year-old heavy-metal pioneer found himself in the middle of the pop conversation last year when Post Malone recruited him for “Take What You Want,” their pitch-perfect power ballad from Malone’s smash “Hollywood’s Bleeding” album. Now, Osbourne is readying a record of his own that he made with Malone’s producer Andrew Watt; bassist Duff McKagan of Guns N’ Roses and Red Hot Chili Peppers drummer Chad Smith are also in the mix.

Young Thug
Hip-hop’s boldest dresser — not to mention one of its most distinctive vocal stylists — has several projects reportedly in the pipeline, including an album with the tantalizing title “Punk” and a full-length collaboration he’s said to have made with Juice Wrld, who died last month at age 21.

Frank Ocean
The elusive R&B auteur hasn’t revealed anything official about his feverishly anticipated follow-up to 2016’s “Blonde.” But if he’s truly set to headline Coachella, as is widely rumored, then Ocean seems all but certain to time his new album to the April mega-festival (as Kendrick Lamar did a few years ago with “Damn”). Then again, Ocean’s recent string of singles led many to expect him to show up at November’s Camp Flog Gnaw Carnival — and we all know how that turned out.

Haim
L.A.’s premier sister trio isn’t making it easy to predict where the three will go on their third studio album. “Summer Girl,” the first of three 2019 singles, was a stripped-down Lou Reed-style jam, while “Now I’m in It” was classic uptempo Haim and “Hallelujah” a folky acoustic tune.

Dixie Chicks, “Gaslighter”
The outspoken country trio — whose last album, “Taking the Long Way,” came out in 2006 (and won Grammys for album, record and song of the year) — returned to the studio in 2019 for a guest appearance on Taylor Swift’s “Lover.” Now they’re working with Swift’s right-hand man, Jack Antonoff, on a divorce-inspired record that lead singer Natalie Maines has described as “10 times” more “personal and autobiographical” than “Taking the Long Way.”

Justin Bieber
With appearances on tracks by a diverse array of acts including Luis Fonsi, DJ Khaled, Ed Sheeran, Gucci Mane, Billie Eilish and Dan & Shay, Bieber hasn’t exactly been hard to hear in the half-decade since his last solo record, 2015’s Christian-themed “Purpose.” But this year, he’ll be nearly impossible to escape, with a comeback single, “Yummy,” set for release on Friday, followed by the late-January premiere of a YouTube reality series, a world tour that kicks off in May and an album (as yet unscheduled) that the now-married man says will be “different than the previous albums just because of where I’m at in my life.”

Rihanna
The wait for “R9,” as fans refer with increasing impatience to Rihanna’s upcoming ninth studio album, has become an internet joke — so much so that Rihanna herself got in on it recently with an Instagram post in which the singer (who’s been spending her time on acting, her clothing and beauty lines and a lavish coffee-table book) captioned a video of a dancing puppy like so: “update: me listening to R9 by myself and refusing to release it.”