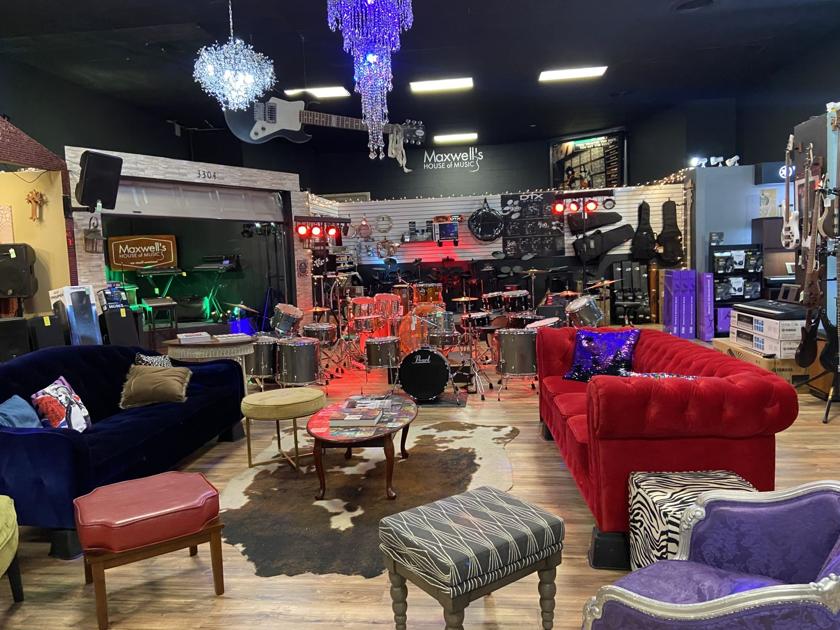 JEFFERSONVILLE — Maxwell’s House of Music has operated in Southern Indiana and Louisville for decades, and over the years, the Jeffersonville music shop has continued to grow.

In the past few months, it has seen significant expansion, from guitar repair to a brand-new music venue, and it is offering local musicians and customers more opportunities than ever before.

The music shop, located at 1710 E. 10th St., is going through a series of renovations and expansions, including expanded inventory, new layouts and more musical resources. One of the biggest changes is the addition of the Clark County Opry, a new country music venue set to open later this month in the former Maxwell’s House of Fitness, which is attached to the store.

The shop offers musical instruments, equipment, music classes and more, and it is owned by business partners Mark Maxwell and Jeff McNicol. McNicol joined the longtime Maxwell family business as a partner several months ago. The new partnership has made it possible to start these ongoing expansion projects through McNicol’s investment, Maxwell said.

Maxwell’s House of Music recently added a room for guitar repair, and in its showroom, the shop has expanded sound equipment into a room previously used as a set for videos.

“Right now, we can work on anyone’s guitars,” Maxwell said. “Banjos, fiddles, any of that stuff. But the next step would be getting someone to do electronics. That’s hard to find, too, but our heads are up looking to see who’s in town, who would be interested in being part of what we do.”

Through the renovations, the shop has added extra lesson rooms, hired several new music teachers and expanded the concert room.

A new recording and video studio, run by local musician Joel Jackson, should be completed by February.

“With our recording studio, now we can do performance videos,” Maxwell said. “We can do some really cool video and audio recordings that could have never happened in the past, and that could have never happened without Jeff coming in and saying, let’s get someone in to make that happen. So there’s all these little things that are happening that just keep expanding, and this has all happened in the last three months.”

Customers will notice a more open front of the music shop, and can browse more equipment and instruments in the showroom. The store’s inventory has expanded dramatically, including more lines of drums and guitars, which has “upped the game,” Maxwell said.

A stockroom in the back will eventually become a high-end showroom, but Maxwell said they are keeping the details a secret for now. It should be completed by spring of next year.

“It’s going to be kind of an invitation-only place,” he said. “It’s for that high-end customer. It will be something where not everyone can touch the instruments.”

Maxwell said the shop’s Christmas season was particularly successful with the expanded inventory, and there’s been more foot traffic due to the recent changes. He looks forward to seeing the future of the store as it continues to grow.

“We’re committed,” he said. “We’re just a bunch of musicians who love music. We want people to learn to play music, and I think at the end of the day, that’s pretty much it. And then we want to showcase the music that happens.”

McNicol is excited about the ongoing growth at the store, and he wants to make the shop a destination in Jeffersonville, he said. With the addition of the Clark County Opry, he believes they will bring in a variety of new customers.

Although the store has typically sold more to musicians performing pop and rock music, he expects to sell to more performers in the country, folk and bluegrass genres.

“It will open up the store to a whole different customer base, who maybe have never even heard of Maxwell’s,” McNicol said.

Maxwell’s is also preparing for another big announcement about something “that’s going to kind of blow everyone’s mind,” he said. The shop is also planning to introduce an online store later this year.

McNicol has brought his own talents to the table in their vision for the shop, and the Opry would never have happened without his partnership, Maxwell said.

“I’m kind of letting him take the reins,” Maxwell said. “I am standing back, I’m saying, what do you think, whatever you’re good with, I’m good with. I’ve done a lot of my stuff through the years, and it’s gotten us where we’re at. He’s going to, I think, take it in another direction or actually, even better, a further direction than where we’ve gone.”